Today I have taken the craze of the sweets. Era un po’ of days that I thought and wondered what I could try, I had a craving for sweets and fried so, after some research on the internet, I decided to donuts, le ciambelline americane di Homer Simpson. They are different in flavor and texture compared to donuts that are found in our bakeries, those sugar-coated mean, as American ones are more compact and they know more than butter. A hand to the short line! 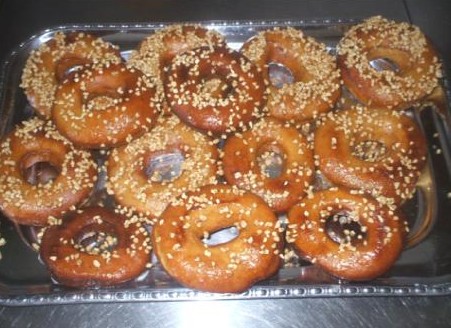 The I try to McDonald and sometimes I tried to make her, but I had never come the same way, but this time I must say that it is satisfied, It is just equal, least of flavor! And the icing!

Since there are I write the recipe I followed. I've taken online but I worked after I did some tests. But the preparation is a little’ more laborious, because if you want to do them well you have to spend time and it takes a lot of patience.

Just dissolve the yeast in warm milk and mix everything together the flour, sugar, melted butter and eggs. Then he let it rise for an hour. Not much ballooned because the compound is very buttery and compact. Then they take two sheets of baking paper, inserting the mixture between the two sheets and extends a strisca high two centimeters dough with a rolling pin. Warning flour to the dough before putting on the baking paper, because as far as this can be oily, the compound attaches the same. Remove the upper paper and form of donuts using Round kitchenware, a larger one and a smaller one. I used the base of the food processor and the opening of my son's bottle to the inner hole. Just a little’ fantasy! You can make the size you prefer, but I recommend you do indoors hole wide enough because the dough will grow back again. Once formed all the donuts are placed on a baking sheet covered with waxed paper and bake for ten minutes at medium temperature until the donuts will be regrown, but be careful not to cook them completely because then the oil will rifritte. Remove them from the oven, then, and quickly fry them in hot oil, very short time, just to brown them since they are already cooked. Then let them dry and cool on kitchen paper. Prepare the glaze by mixing powdered sugar and melted butter, and dipping the donuts from a side passing only then in chopped hazelnuts. Place on a tray and place in the fridge until it has completely congealed icing.